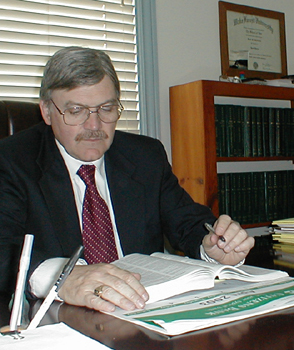 David M. Macfarlan, Esq. is a competent, experienced attorney who has successfully represented many individuals, their families, and small businesses in their experiences with the law and the legal system in the five county metropolitan Philadelphia area.

A graduate of Neshaminy Senior High School in Langhorne, Pennsylvania, David then attended Penn State University, and then graduated with a Bachelor in Arts degree in Economics from the College of William and Mary in Virginia.  He then attended and graduated from Wake Forest University School of Law in 1976 with a Juris Doctor degree, passed the Pennsylvania Bar Exam, became licensed to practice law in Pennsylvania and the United States District Court for the Eastern District of Pennsylvania, and became law clerk for the late Honorable Arthur B. Walsh, Jr. at the Bucks County Courthouse in Doylestown, Pennsylvania.  After that, he was associated for several years with the law firm of Charles W. Wilson and Associates in New Britain, Pennsylvania, before beginning his own law firm in Horsham, Pennsylvania, in 1981, where he practiced law until 2003, when he moved his law office to its present location nearby at 1255 Easton Road (Route #611), Warrington, Pennsylvania 18976.

David M. Macfarlan is a member of the Pennsylvania Bar Association, the Bucks County Bar, and is a member of the Hatboro Baptist Church.  He has represented many local businesses in their legal matters, and enjoys representing and advising individuals in their important legal matters.  Mr. Macfarlan is aware that legal representation is serious business which should be handled carefully, conscientiously, confidentially, and with a responsibility to communicate diligently and regularly with clients.  Mr. Macfarlan’s fees are reasonable, fair and competitive.  Evening appointments are available by appointment.

Everyone today sees the big legal television advertisements while watching their daily TV shows. Large law firms today have taken big advantage of these marketing techniques to lure in clients. However, once people go to these firms they find they are treated like a number and not a person. Then later the client gets the huge legal bill in the mail. At David Macfarlan’s Firm we offer affordable rates for our hourly billing and when it comes to injuries and Workers Compensation, we do not collect money if you do not collect money. You will find by choosing David Macfarlan that the people here are friendly, personable, and the client is treated with the upmost respect, for the client is the our firms number one priority.